In the late '70s I became interested in computers as a means to create the art of the future, and as a way of achieving my goal of creating works that united music and visual art in one medium. My first computer art work was a short program written in BASIC on a Commodore VIC 20 in 1980. It was an infinite loop that generated music and graphics randomly so that the loop would go on forever, following a pattern but never repeating. In the '80s I went on to write such algorithmic computer art programs for the Texas Instruments TI994A and the Commodore 64 in BASIC and FORTH. I called them "Music/Graphics," and they were shown in Michigan in Ann Arbor and Detroit in exhibits by Eyemediae and others.

I chose to do my work on cheap home computers partly because I did not want to work at a large institution just to be able to get my hands on good hardware, but also at that time home computers were the only ones I knew of that came with audio and TV-compatible video output. I was able to output directly to monitors and video recording equipment. I always was interested in distributing my art to a mass audience, which video made possible. Around 1985 Chris Chapman and I began a series of computer art shows on Ann Arbor Community Access Television, based on the ability to directly record the computer art to 3/4 inch videotape.

In 1986 I got my first Amiga computer, which at the time had more advanced multimedia hardware than Apple or MSDOS computers. From Wikipedia:

"The Amiga was so far ahead of its time that almost nobody—including Commodore's marketing department—could fully articulate what it was all about. Today, it's obvious the Amiga was the first multimedia computer, but in those days it was derided as a game machine because few people grasped the importance of advanced graphics, sound, and video. Nine years later, vendors are still struggling to make systems that work like 1985 Amigas.

I used two paint programs and color-cycling to create what I called "video paintings" because the compositions remained the same while the colors cycled. I began the Light Dreams series with a 2-hour work that included 120 video paintings from the 500 I did the first year I had the Amiga. They took up a lot less space than 500 traditional paintings would have, and they moved. As for music, the paintings looked like they were synchronized with whatever music was playing. Ann Arbor disco The Nectarine used the first Light Dreams tape for five years to go with their music. The 10-minute derivative work Brief Light Dreams was excerpted in Computer Dreams (1988) [Amazon][IMDB].

After completing three videos in the Light Dreams series I turned to non-computer video art and making a living. My new work is using current web technologies that I've been learning the last few years, and doesn't include music. I imagine that on a wall-mounted flatscreen it would be a good replacement for a traditional painting. 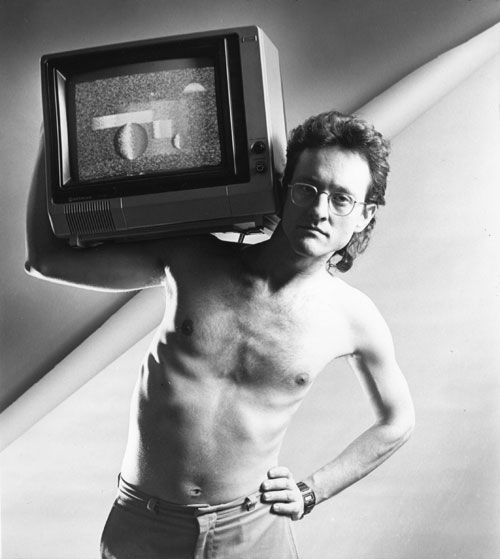 Promo photo for Light Dreams I circa 1988 by Tom Marks