"101 Scenes from the Land of Color" Solo Show 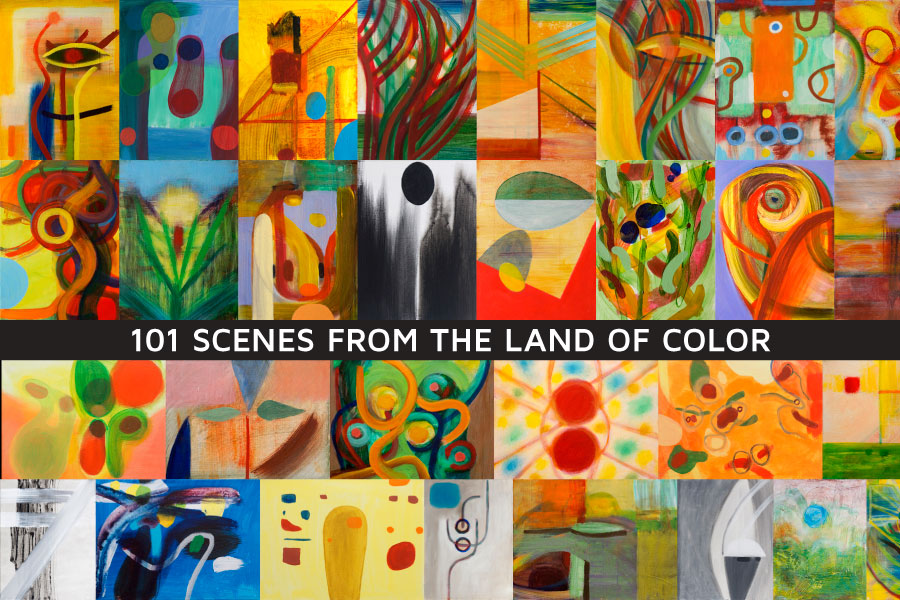 “These paintings are glimpses of another world brighter and safer than ours, where the colors are characters in a fantastic land of their own.”

Orin paints from a love of color, and invites you into his land of color. The work references landscape, life forms, geometry and forces of nature and the universe, but this is a dimension where colors are characters playing out their own dramas on the stage of modern traditions of painting. Aside from this theme, these are first of all paintings, and they use an expansive set of the ideas of abstract art and painting in general. He tries to preserve the energy of the gesture and the beauty of the paint while finding "significant form" and the mysterious space beyond the surface.

Orin pursues painting as part of his art practice which also includes algorithmic computer art, video art, photography and music (orinbuck.com, lightdreams.tv). In recent years he has mostly avoided painting while producing many small line drawings. But about a year ago he discovered the availability of small, cheap pre-stretched canvases, and found that he can be very productive in by working on a large number of small canvases, exploring with a new freedom the ideas discovered in the small drawings. Just as important to him, the small paintings are affordable and easier for people to welcome into their lives. The present exhibition is a selection of the paintings produced since August 2015.

Orin Buck, Ann Arbor MI native and New York City resident, is an artist working in visual, audio and computer arts. Having pursued English and history majors at the University of Michigan he is mostly self-trained in the arts of painting, photography, videography, computer programming and music. He began painting seriously and playing music in his teens. In the 1980s he began learning computer programing and creating algorithmic computer art and music videos, uniting his visual and musical interests in one medium. He was also in bands playing bass guitar and learning audio engineering and recording, and producing shows and doing graphic design for publicity. He began making videos and learned editing doing projects for public access television. He was a graphic designer and arts journalist in the '90s, writing articles and editing the arts page for an alternative newspaper. He also began a videography business, documenting live theater, dance and music. Since moving to New York he has been involved in the Internet as a web designer and producer, a happy combination of his interests in hypertexts, publishing, visual design, and computer and video technologies. In his freelance business he has also continued to work with video, photography, and audio engineering. He currently exhibits computer art, video art, photography, and painting (orinbuck.com), and plays bass in the eclectic New York rock band Fist of Kindness (fistofkindness.com).