"Space Weather Alert" is a digital print with an illustration of a news article from NASA summarizing a study that showed that the United States electrical grid would collapse in sections affecting 130 million people if there is a solar flare as big as the one recorded by Carrington in 1859. Severe Space Weather--Social and Economic Impacts

Perhaps 350 transformers that coordinate electricity distribution would melt from electrical overload. They are custom built and would take months or years to replace. There is a book about how to survive in that situation which brings some more information to the table. It is summarized in this article on Huffington Post: The Solar 'Katrina' Storm That Could Take Our Power Grid Out For Years. If you click on just one link here, I suggest this one. And the news is not all bad. 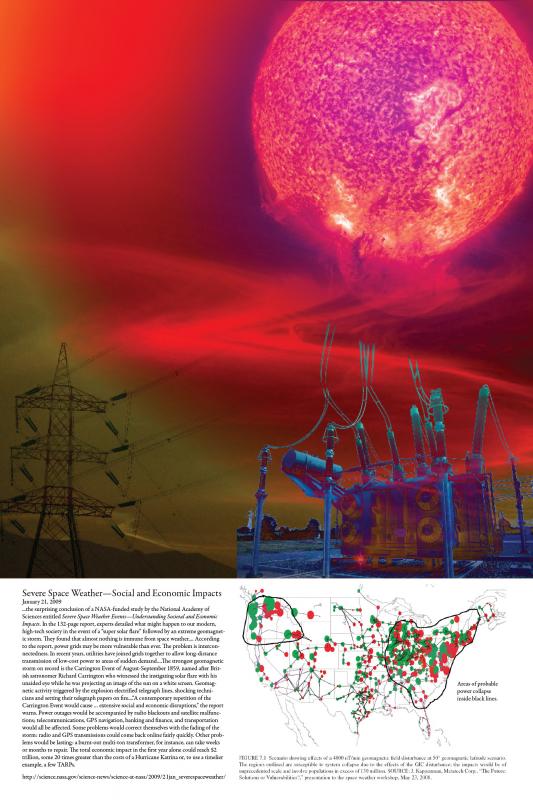 In this and other interviews the author mentions a couple of reasons for expecting a disaster in 2012 or 2013. Here is the NASA report that the alarmists (I won't promote their links here) use to say that 2012 will be a bigger than usual solar weather year:
March 10 2006 Solar Storm Warning
But that is from 2006 so there is better information now:
May 29, 2009 New Solar Cycle Prediction
This says the peak will be in May 2013, with lower sunspot activity than in previous peaks, but with a repeat of the 1859 Carrington event still possible. So far this year there was an unusual solar flare that NASA has released spectacular video of:
Dark Fireworks on the Sun
It wasn't pointed at Earth this time.

In the years before major disasters there are often people who warn of them. 9/11 was predicted in the intelligence community. The failure of the New Orleans levees was predicted before Katrina. The collapse of the financial system was predicted by several experts. The fragility of nuclear plants in earthquake-prone Japan was well known. But not enough people were convinced of the danger in time to prevent these disasters. I'm hoping to do a little to spread the knowledge of this possible new disaster so that we can have a better chance of acting in time.